Well It's A Grand Old Team To See

Without the support of the fans both home and away it just wouldn't have been the experience it was for the last two seasons at Wainuiomata AFC.  Here are a few shots of some of the die hard fans who turn up home and away to cheer on the boys rain, hail or shine.

Wainuiomata kicked off their 2013 season with their opening fixture in The Hilton Petone Cup against tournament hosts Petone.  With this being the last time I get to watch Wainui play (insert sad face here) I was hoping for a barnstormer just like last years game against the same opposition.

With the departure in the off season of Scott McLeod Jr and Sr a new coaching team oversaw a valiant Wainuiomata team effort as they went toe to toe against  the Central League heavyweights.  Cam Blake was full of tricks as usual and Matt Faulkner was inches from latching on to a through ball from Neil Barclay as Wainui went looking for the early goal.  Petones David Lane was his usual calm self though and marshaled the Petone back four well enough to snuff out any danger from Wainuis forwards.

Local hero Ralph Chenery got a start in goal and mid way through the half was called in to action as Petone won a penalty for a trip inside the box.  Ralphie dived to his left to keep out a powerful strike to keep the scores locked at zero.  The half closed out with neither side able to break down the others tight defence.

The opening goal came in controversial fashion on the hour mark.  A sweeping Petone move saw the ball moved to Wainuis right were Liam Bell looked to clear the danger.  What looked very much like a push by a Petone attacker went unpunished by the referee and Ralphie was beaten to his left as Petone took the upper hand.

The second came shortly after as petone caught Wainui on the counter attack and were awarded a second penalty, this time for handball.  Wainui legend Ralphie guessed the right way again but the penalty was clinically dispatched as Petone doubled their lead.  Wainui did have some late chances but some good goalkeeping from former player Simon Rippon ensured the score would remain 2-0 to the home team.

And so my weekend trips to watch Wainuiomata play come to an end.  I would like to wish the new coaches for the season the best of luck and hopefully promotion to The Central League isn't too far off.  Unfortunately that's all for now folks, it has been a lot of fun for sure!!

It's been a while since the league season ended for Wainu and last Saturday night the annual awards dinner was held at the clubrooms.

Goalkeeper Michael Howells came away with the Player of the Year award for a string of classy performances between the sticks for the team.

From the penalty save in the season opener to the superb one handed stop against Stop Out the award was thoroughly deserved.

With safety secured for another season it's time for the coaches and players to relax, unwind then come back ready for another shot at Premier League glory in 2013.

The season came to an end last Saturday with the final game of the season against Wellington Olympic.  It was a fairly anti-climatic day as the game was shifted from the familiar surroundings of Richard Prouse Park #1 pitch to the depths of pitch #3.  There was a full team for Wainu to pick from this week which meant there was no need for Scott MacLeod Snr to offer his services to the team as a substitute for the second week running.

Both teams had goals ruled out for offside in the opening exchanges before Olympic took a somewhat deserved lead on the half hour mark.  Pitch #3 isn't renowned for being the greatest of pitches and it was somewhat of a battle for both teams to come to grips with the underfoot conditions.  Wainui did have a couple of half chances before the break but just couldn't find the killer touch that would have drawn the game level.

The home team began brightly in the second half and were awarded a penalty for handball in the box.  Up stepped Mr. Versatile Shon McKechnie to put another penalty away to add to his goal tally for the season.  Olympic stepped up another gear from the kick off and restored their lead five minutes later.  It was real end to end stuff after Olympics second and Matt Faulkner almost leveled again for Wainui but his effort was just off target.  Olympic then increased their lead when a dangerous ball was floated in to the back post and sent flying past Howells in goal to all but end the game as a contest.

As the game entered its' final stages the biggest roar of the season went up as local legend and everybodys hero Ralph Chenery made a late appearance as a substitute.  His impact was immediate though as he delivered an inch perfect cross from the right to Joel Evans who controlled the ball, spun and powered the ball in to the bottom corner of the net.  The RCSC were in raptures at this point as the game was alive as a contest again and Wainui had a sniff of maybe a draw with five minutes remaining.

Olympic hadn't read the script and scored two late goals in the remaining minutes to silence the home crowd.  They left the valley with a 5-2 victory, their first win over Wainui since returning to Wellingtons Premier League.  Safety was secured a while ago for the boys so the result today was for pride more than anything else.  A mid table finish definitely an improvement on last season.

Ralph then acted as compere for the speeches back in the clubrooms (is there anything he can't do?) where it was announced that Division 6 team The Undertakers had avoided relegation with a huge 5-0 win at Awakairangi Park.  And with that the season is over, well all over bar the shouting.  Next up is the annual end of season prize giving where player of the year is awarded.  Neil Barclay was last years recipient, who will it be this year??
Posted by Max Power at 9:38 PM No comments: 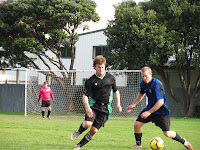 Curts Half Baked team were short a couple of players so I dusted off the old boots and headed out to Mirimar Park to lend a hand.  It was the final game of the season for Curts team and with only pride left to play for could the Half Baked boys match the speed and power of Miramar??

Half Baked were an equal match for the home side and proved that with two goals of pure quality from open play.  The first fell to Craig Auty who first controlled the ball, then unleasehed a 40 yard scorcher past the statue like keeper.  Not to be outdone, team captain Richard Armstrong hit a venomnous drive from all of 25 yards that nestled in the bottom corner of the net (not sure if it took a bit of an extra touch from Marshy to help it over the line though). 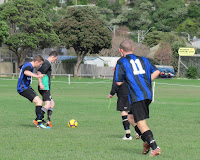 The two goals, however, were bookends from six of the best from a Miramar team who were only too happy to play a slick passing game all day.  There could have been more goals for Miramar save for some good goalkeeping from Curt and some woeful finishing from their forwards.

The muddy conditions were too much for me and I was glad for my 40 minute cameo.  Incidently Half Baked scored both goals with me off the pitch.  That is probably why the boots have been buried deep under the vegetable patch!!
Posted by Max Power at 9:13 PM No comments:

At the end of the day : A season of Saturdays

Wainuiomata AFC have recently returned to Capital Footballs Premier Division in Wellington having won the Division 1 title in 2010.

Having played for the team until I decided to pursue other intersts, marathon and ultramarathon running, I thought it would be interesting to come to their games and try and document the highs and lows that a football season in Wellingtons Premier Division can bring.

This is not an official Wainuiomata AFC website nor does it encompass the views of the club or its' sponsors. Really it's just the inane ramblings of a fomer player gone mad who really just needs something to do of a Saturday afternoon.....Enjoy!!